Dove was found in Jamaa Township advertising for a giveaway; soon to do the trusting scam.

When everyone first arrived to her den, she started it by saying they were going to be playing a few games, like:

And she also had another game where you had to be the first to click the same emoji as her but those two ended up being a cover up for what she was actually planning to do.

Everyone kept calling her out as a scam so she ended up locking most people out. I was able to stay in the den but when questioning her about her methods, she continued to ignore me. 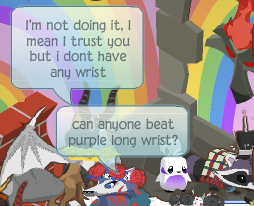 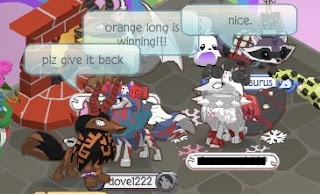 Dove ended up running her trust trade for probably about a half an hour before it was done. I watched as she continued to gain people's trust by gifting their items back to them when they were done. 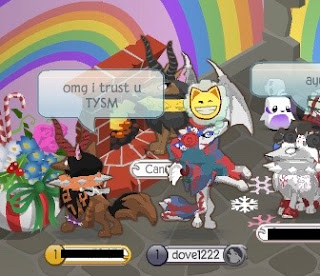 In the end, Dove ended up scamming someone of a neon bow and a den beta and locking everyone else out.

Report dove here for scammin. And until next time,

Hey all, Jade here with your update post for March!

First up for this past month: Omega Rose joined the society and was promoted to Gamma! We're glad to have them with us.

We have also created a Get to Know the Agents page, which you can check out here!

To help us keep better track of our posts and agents, we have created a society-wide database. It's not available for non-agents to view, but we're very proud of ourselves so we wanted to let you know anyways.

Finally, we have discussed creating social media accounts in order to better integrate with Feral when it is released- so, keep an eye out for that over the next few months!

Thank you all for reading! Please stay safe, especially with the virus going around right now. Stay home, wash your hands, and Jam On!
Posted by sam at 23:00 No comments:

Agent Insights Ep 34: What counts as a scam?

Hello everyone. Flint here, to talk about what counts as a scam.

I often see people who call things scams that we don't really consider to be scams. Things like claiming it's your birthday, advertising for mailtimes, etc. are some of these things. Today, I thought I'd make a list of things that make a scam a scam.

Deceptive
A scam must be deceptive. There must be lying, misleading, or taking advantage of someone's lack of knowledge in order for a scam to be a scam. In most scams, they promise something in return for your things, but never give it. Or they say if you don't do something, they'll harm you, when they really can't. Or they pretend to be someone they're not. Either way, some deception must be involved.

Someone who just says "give me your spikes", takes the spikes, and leaves wasn't scamming anyone. He just left with the spikes, he never promised anything in return. If you want to give away your spikes to someone for nothing in return, then regret it, that's not a scam.

Intent counts here too. Someone making bad trades with newer jammers who don't know any better is still scamming, even if he knows that his items aren't worth anything, since the other person didn't know.

Theft
A scam must involve something being taken from you. Whether it's items, currency, your password, etc. doesn't matter, so long as something was taken.

If an event was deceptive, but nothing was taken from anyone at any point, it's not a scam. Trolling, joking, and the like are not scams. They're annoying, but there's no harm done.

If there is no deception and/or theft, it's not a scam. There are, however, some tricky cases that are still scam-ish, but aren't really scams. These include:

- Lying about what they wanted free items for, but with no pretense of giving anything in return. We do not consider these scams, or not 'full' scams anyways. It's impossible to verify if these claims are true or not, and you already knew you'd be giving away your items for free. You were never forced/coerced into giving them away, and there's no expectation of you giving them valuable items. (Examples: birthday claims, mailtime advertisements, "I'm poor give me stuff"s, etc.)
- Hacking/harassment/legit threats and the like. People who harass you until you give them stuff aren't scamming you, but they're still breaking rules and being mean. We consider them in the same category of behavior standards.
- People pretending to be famous jammers are still considered scammers, since it's easy to verify that they aren't famous, and pretending to be a famous jammer comes with the expectation of giving valuable items

We still post about threats/harassment/hacking, but we will not post about birthday-claim type stuff, nor will we post about trades you regret. Bottom line is, a scam must be someone deceiving you into giving up your items.

Posted by Flinty Flakes at 02:52 No comments: 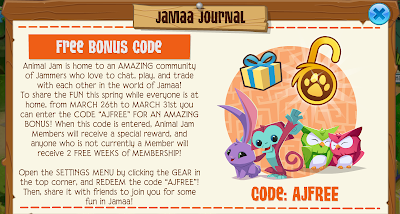 This past week, Animal Jam released a promo code through the Jamaa Journal that will give two weeks of membership to any non-member! This was likely brought on by the influx of new activity as a result of the coronavirus social distancing. 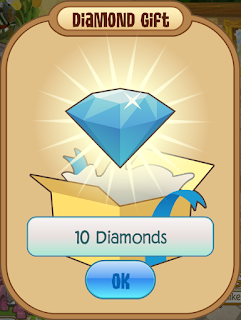 For anyone who is already a member, you can receive ten diamonds from the code! So, whether you're looking to receive a membership or just some extra diamonds, this is a great opportunity for you.

That's all for today! Hope you all are doing well and staying safe at home. What's your opinion on AJ giving membership out for free? Have you taken advantage of this code yet? 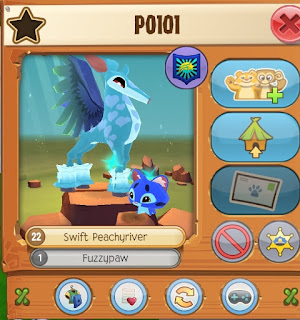 What's up everyone! Today, I bring to you a scammer post. The user in question is P0101. I'm not sure if that's how you spell it, because I couldn't find their user when I tried to search them. If you guys know how to decipher the username, please let me know!

Ok, so I was hanging around Appondale when I saw them advertising a shop in their den.

They claim that the first to buy something gets a prize.

At first, I thought it was ok, because they were using the shop mechanic in AJPW. However, I went to check it out anyway, just in case.

Below is their shop:

So, all their stuff costs sapphires. Sapphires are the diamonds of AJ. They are harder to get, premium currency.

I decided not to buy any stuff because I didn't want to use my sapphires.

Anyway, there is a chance this could be a scam because they could just take your sapphires without giving you said prize. In addition, there is no way to really prove that you are the first person to buy something. 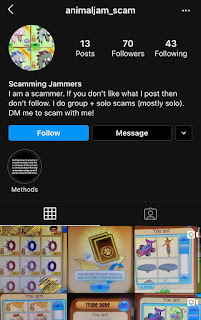 This account is simple enough, mostly showing off the items they've scammed. 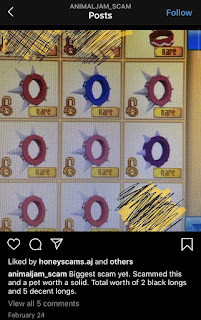 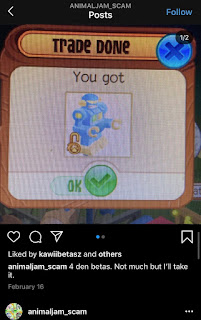 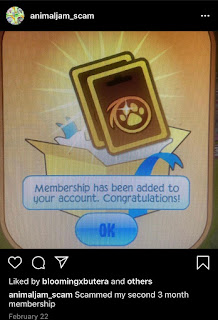 They also sell scamming methods to other scammers. 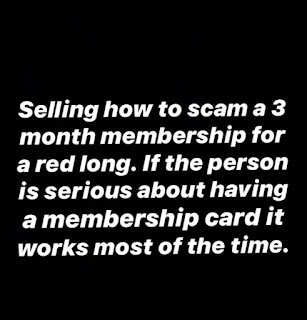 Stay safe out there ya'll. There are a lot of these Instagram pages out there. Until next time,

Agent Insights Ep 33: Infiltration (and why there's a rule about it)

Hello, everyone! Flint here, posting on my Coronavirus Vacation. For today's Agent Insights, I will talk about infiltration.

Infiltration, in this sense, means non-scammers pretending to be scammers in order to get access to scam teams/hangouts. Usually, the aim of this is to get the usernames of the scammers to report,  gather evidence to make posts, prevent scams by showing up to the ones planned by the group and warning people, or gaining insight into scamming methods to more easily catch scammers in general.

In our Code of Conduct, there is a rule which states, "If in any case you find out about a scamming team or another agent asks you to scam with them, DO NOT, under any circumstances, try to go undercover. Instead, get evidence and report to someone higher up." There are several reasons why this is a rule, many of which also apply to non-agents.


And, for one-on-one things like if another agent asks you to scam with them, the first point still stands. There's also very little you could do with infiltrating that you couldn't do by reporting to higher-ups, with much less risk.

As you can see, infiltrating is a tricky business, and should be avoided for all the aforementioned reasons. It's too much risk for too little reward. This goes doubly for SASS Agents.

That's all for today's post. Bye!
Posted by Flinty Flakes at 15:26 No comments:

What's up everyone! I'm here with your next dose of Random Saturdays! Alright, today I'll be talking about the Feral Beta Testing update that I'm sure many of you got.

Recently, I received an email from WildWorks that the closed Beta will be opening up to "more players than usual". When I saw that, I thought that it could mean round one of beta testing is over. That means, it could be time to move on to future rounds!

In addition, they also said that it's not too late to sign up to be a beta tester. I guess, those who haven't signed up yet can still do so at the official feral website. They probably will be able to join in the closed beta when WildWorks decides to roll it out to more people.

Speaking of which, the email said that they will be rolling it out "in the next few weeks". So, it is happening very soon!

Lastly, it seems as if everyone who signed up to be a beta tester got the same email as I did. If you know you signed up for the beta and weren't picked for round one, you might wanna go check your email now. Also, don't forget to check your spam box in case you cannot find the email in your inbox.

That's all from me now for this episode of Random Saturdays. Stay safe and Jam on!
-Dew
Posted by Dew at 07:13 No comments:

If the Discord widget is not working above, you can join our Discord via this link: https://discord.gg/fXxHWax